Tripawds Supporter sites have no ads!

Let’s get this Tripawd Party started

Tripawds is a user-supported community. Thank you for your support!

Today we received in the mail a care package from Bud & Anjl for Miss Bellona who happens to be a Feburary Furball too! We’ll all hold Ampu-birthday / Ampu-versary parties even though we live far away from each other. For Bellona this will be the 1 year mark as a Tripawd Warrior.

I can’t wait to celebrate this accomplishment since we were told we’d be lucky to buy 9 months with Bellona with the diagnosis of Osteosarcoma – even with Chemo treatments. She’s a stubborn girl and certainly won’t let Cancer stand in her way or slow her down. Bellona still runs faster than her 4-legged siblings and Big B knows that being a Tripawd isn’t a disability despite what humans may think.

Let February be a pAwesome month for the February Furballs!!! 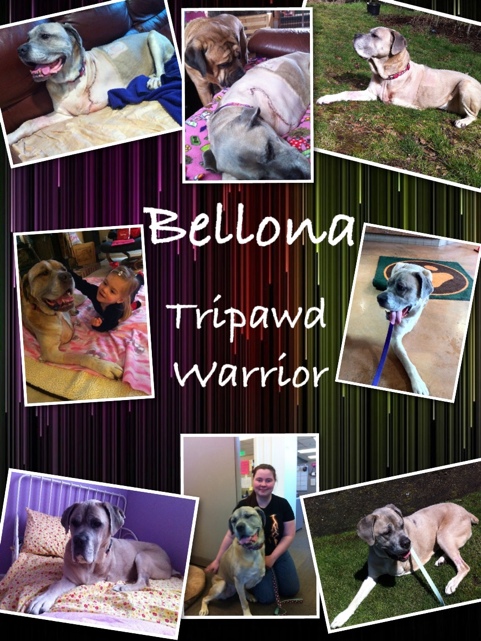 To remove ads from your site and others, upgrade to a Tripawds Supporter blog!

Tripawds is a user-supported community. Thank you for your support!

Monday was Bellona’s 9 month Ampuversary! Happy to report Bellona is still doing great hopping on 3 and showing Cancer who’s the boss. We need to get her back into the vet soon for a check up since she’s taking the oral chemo pills. Yay for Our Tripawd Warrior! 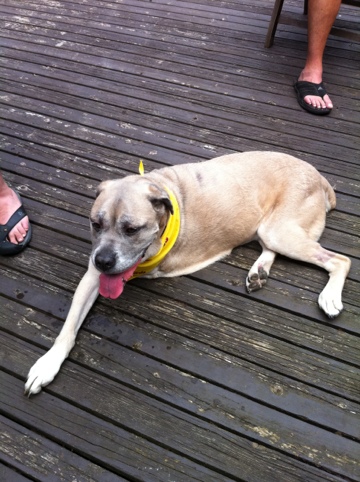 It’s been awhile since I’ve written but the good news is we haven’t had much to report.

In August Bellona turned 10 and we celebrated with cheeseburgers for all – including Big B.

Bellona continues to kick cancer’s butt and still takes radiation pills every day. We’ve seen no change in Bellona – she continues to be ornery and stubborn like any typical Corso would.

In July we met up with other NW Tripawds and their parents. Here are some pictures since the last blog post. 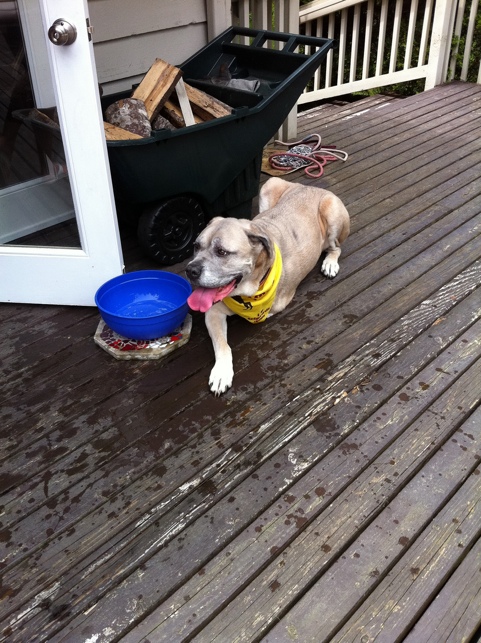 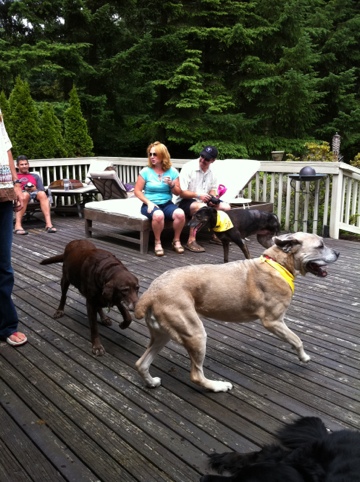 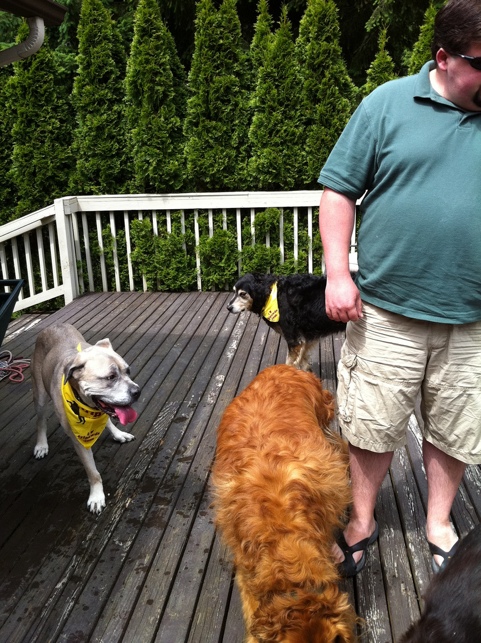 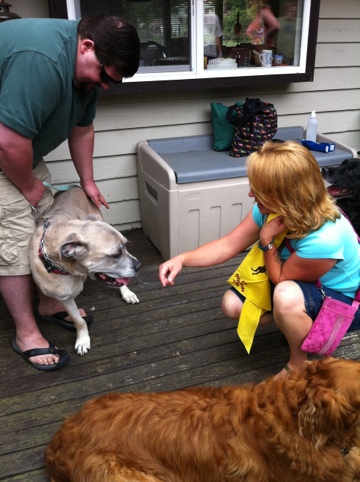 Right now Big B is hiding from fireworks that a distant neighbor is setting off but I’ll give her an extra piece of cheese tonight before bed.

Thank you to the other Tripawds and their families with the support for our Tripawd Warrior Bellona. 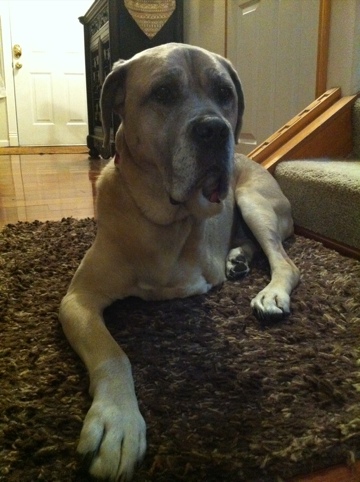 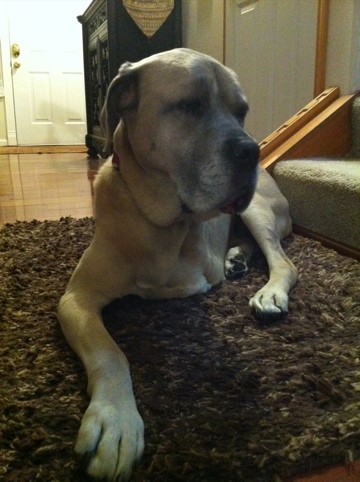 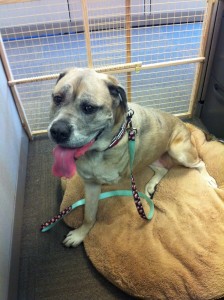 On Friday I took Bellona to work with me and she had a VERY long day.  Normally Bellona will sleep till late morning, have some breakfast and back to snoozing all day.  However Bellona’s morning started at 7:00AM with getting up and going to work. 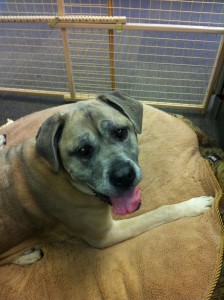 First we made a trip to daycare to drop off our 2-legged daughter.  Bellona was NOT happy being left in the car for 3 minutes alone.  Then we had a 45 minute car ride and we pull up to a mysterious 4 story building. 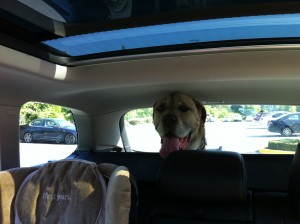 We make the trek from the parking lot with all of Bellona’s essentials.  I must of looked silly carrying all the bags of her things (food, bowls, AM medications, bed, treats, toys…). 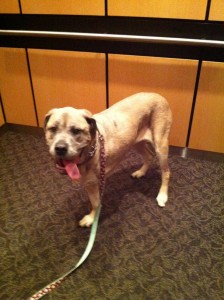 We made it to the elevator and Bellona was somewhat hesatant.  I can’t remember if Bellona had been on an elelvator before or not.  We could have taken the stairs – she’s a tough Tripawd but with carrying all of Bellona’s essentials I needed a break. 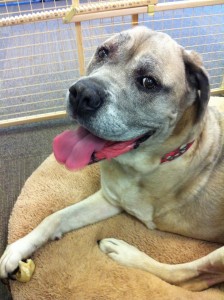 We made it to the office and I took Bellona around to meet everyone in my department to say hello before going to my desk.  Mostly I think eveyone was shocked and supprised of how well Bellona does on 3 legs.  Some of my coworkers have read Bellona’s blog too so they were aware of her story and I didn’t need to come up with a silly excuse of how she lost her leg. 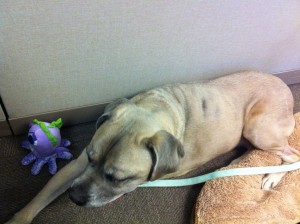 After Bellona met the 20 + people in my department and was pet, adored, and given yummy treats Big B was ready to go home right then and there.  So was I – it was Friday after all. 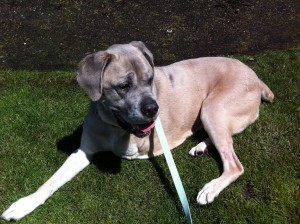 Bellona got several potty breaks outside and got to do some sun bathing on our lunch.  It was a rare sunny day in the NW and Bellona wanted soak it up. 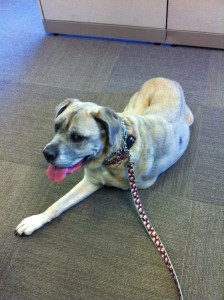 A woman from our purchasing department that is currently fighting cancer and going through Chemo came by to meet Bellona.  She asked what happened and I told her about Bellona’s cancer and that Bellona has went through 6 rounds of Chemo.  I felt bad that Bellona wasn’t bald too but I felt hopeful for my coworker.  I hope she felt that if Bellona can fight cancer then she could too.

Bellona didn’t nap at all while at work.  Even 2 days later Bellona is still really tired and has slept most of the weekend.  It was worth getting a tired dog so Bellona can inspire others. 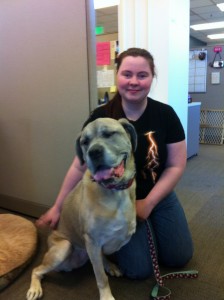 I’m glad I work for a pet supply distributor so I have the opertunity to take Bellona to work and educate more people that a 3-legged dog is not torture and my Tripawd Warrior deserves to live and kick Cancer’s ass. 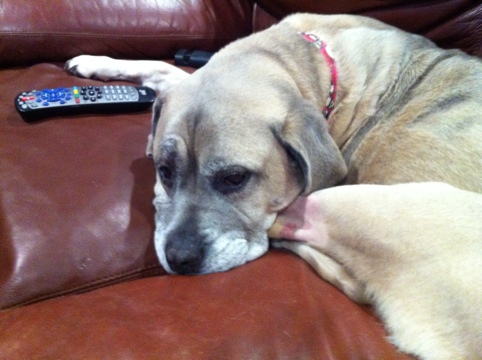 Bellona took my spot on the couch and she was too cute to move her. You can just barely see the razor burn on her back left leg. Actually, it’s Big B’s only left leg now. LOL 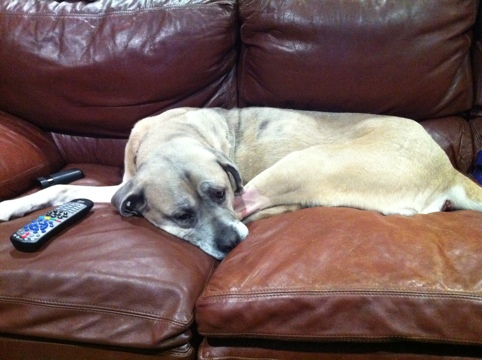 6th and Final round of Chemo

I’m happy to report Bellona had her 6th round of Chemo yesterday.  Just like all the previous rounds she did great and is doing just fine.  The only small setback is a little razor burn but it doesn’t seem to bother Bellona at all. 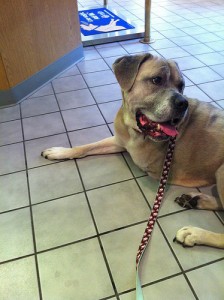 Bellona has an appointment in a few weeks for a checkup, blood and urinalysis in preparationof oral Chemo treatment.  With how well Bellona has done with all of her treatments, I predict this will go well too. 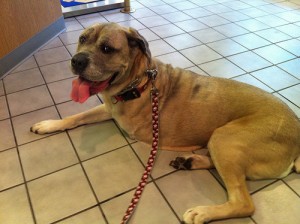 Thank you Dr. Pam for taking care of Bellona!

Thanks to Jim & Rene of Tripawds, Bellona now has 2 designs on Cafe Press!  I know I’m a big dork to broadcast it to everyone but can you tell I’m really excited? 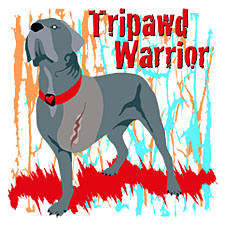 I wanted a Tripawd Warrior design for Bellona because her name is the Roman Goddess of war.  Any dog that goes through all of this is truely a warrior.  I hope others like the designs too because all of our Tripawd babies are warriors. 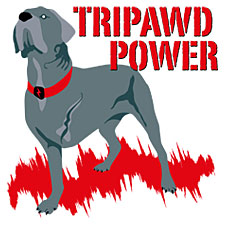 Thank you again Jim & Rene with designing Bellona’sTripawd Warrior and ﻿Tripawd Power logos!  I’m sure to go broke with buying both of Bellona’s designs.

Happy 4 month Ampuversary Bellona! Bellona is a true Tripawd Warrior and doesn’t act different than any other dog that has 4 legs.

Big B’s latest round of Chemo went just fine and with no problems just like all the rest – yay! 5 round done and 1 more to go!

I don’t have a new picture of Bellona but I do have some with our Daughter that I haven’t shared before. 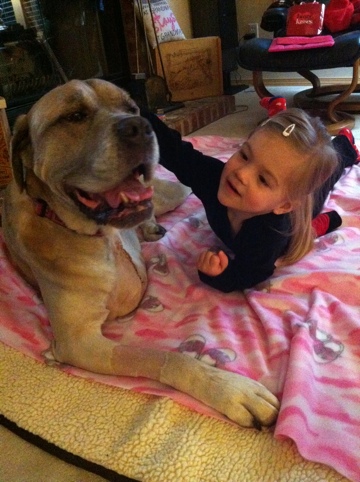 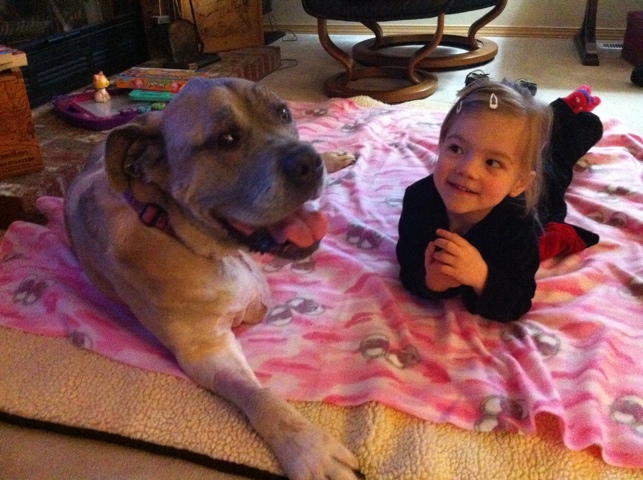 Posted in Uncategorized | 2 Comments
Bellona is brought to you by Tripawds.
HOME » NEWS » BLOGS » FORUMS » CHAT » YOUR PRIVACY » RANDOM BLOG


Tripawds Supporter sites have no ads!